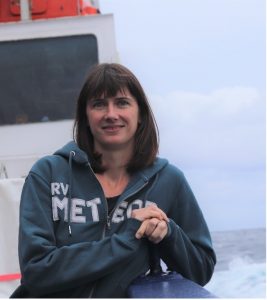 My research work is embedded in the international GEOTRACES program (GEOTRACES Mission – GEOTRACES) which focuses on the biogeochemical cycles of key trace elements and their isotopes in the global ocean. Nations worldwide participate in this project providing their data to the GEOTRACES intermediate data product (IDP).

Trace metals, which belong to the group of the high field strength elements e.g., tantalum (Ta), niobium (Nb), zirconium (Zr) and hafnium (Hf), are present in seawater in ultra-trace concentrations of 10-9 mol/L. The so-called ‘chemical twin pairs’ Zr-Hf and Ta-Nb display similar physical and chemical properties and hence similar depth profiles in the marine water column are expected. However, significant differences in their distribution have been observed which implies e.g. pronounced scavenging of one of the trace metals of each pair of twins. Since the ratios of Zr/Hf and Nb/Ta have been proposed as proxys for palaeocirculation it is essential to understand their behaviour in the water column.

In contrast, marine molybdenum (Mo) and uranium (U) show conservative depth profiles although some deviations have been observed for Mo in suboxic waters. The oxygen concentration in seawater influences the fractionation of dissolved Mo into its two most dominant redox species, Mo(IV) and Mo(VI). Due to their different particle-reactivity, the abundance of dissolved Mo is affected.

Chromium isotopes gained increasing attention in the last few years as a tracer for oxygen levels in the geological past. In the marine water column, Cr is mainly present in two redox species, Cr(III) or Cr(VI), respectively. Photoreduction of Cr(VI) to Cr(III) in the presence of dissolved organic matter or transition metals (e.g. Fe) or hydrothermal processes most probably affect the fractionation of Cr isotopes. We aim to shed more light into this fractionation of Cr into its two dominant redox species to improve the understanding of Cr behaviour and Cr isotope data.

Just recently, I participated in research cruise M176/2 (cruise blog) which focuses on the hydrothermal vent field – RAINBOW – at the Mid-Atlantic Ridge. We followed the hydrothermal plume from its source up to 60 km distance and collected in total more than 1000 samples. These will be analysed for trace metals, redox-sensitive metals and so-called conservative metals to gain information about the distribution in different size fractions and in fluxes and removal processes. Combined with the data from the tropical Atlantic (2010, research cruise GA11) and SE-Atlantic Ocean (2015, research cruise GA08) from different hydrographic settings (e.g. influence of mineral dust, riverine discharge, suboxic waters from the Benguela upwelling) my research aims to gain more knowledge on the biogeochemical behaviour of Nb, Ta, Zr, Hf, Mo, U and Cr in seawater.

Trace metals and their isotopes in the Tropical Atlantic Ocean, embedded in GEOTRACES program, active participation in research cruise M81/1

Trace Metal Chemistry in the Water Column of the Angola Basin – A Contribution to the International GEOTRACES Program, research cruise M121

Poehle, S., Koschinsky, A. (2017): Depth distribution of Zr and Nb in seawater: the potential role of colloids or organic complexation to explain non-scavenging-type behavior, Marine Chemistry, 188, 18-32.

Poehle, S., Koschinsky, A., and Schmidt, K. (2012): Determination of Zr, Hf, Nb and Ta in seawater by the use of an online-preconcentrations system connected to inductively coupled plasma mass-spectrometry (ICP-MS). Geoanalysis 2012, Brazil. Talk.