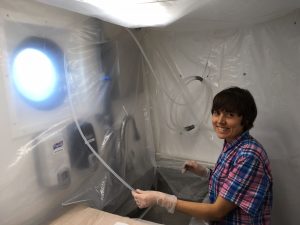 Trace metals and organic matter in the Amazon and Pará River estuary and mixing plume, specifically:

Broadly, I am interested in understanding trace metal biogeochemistry in the oceans. Trace metals are essential for life, but are present in nano- or picomolar concentrations in the ocean. For my Master’s thesis (Aug 2016 – Mar 2019), I worked under Dr. Kristen Buck at the University of South Florida (USF), USA. Here, I researched the regeneration of the trace metals (Mn, Fe, Co, Ni, Cu, Zn, Cd, and Pb) and macronutrients (N, P, Si) from phytoplankton assemblages. In April, 2019, I entered a Ph.D. program under Prof. Dr. Andrea Koschinsky at Jacobs University Bremen, where I have continued to research on trace metals biogeochemistry – this time looking at trace metals in the Amazon River estuary!

The Amazon River is the largest on earth and makes up 15-20% of the global freshwater discharge. It is therefore an important source of dissolved trace metals and organic matter to the Atlantic Ocean. In the estuary, the larger Amazon River also mixes with the smaller Pará River to the south (earth’s 5th largest river), and groundwater from a large mangrove belt from the southeast serves as an additional source of trace metals and organic matter. Together, these waters mix and form a plume that ages as it flows north, mixing with seawater in the Atlantic Ocean. Trace metals are lost or gained during estuary mixing due to factors such as adsorption/desorption to particles, colloidal flocculation, benthic exchange, or biological activity. However, recent trace metal data from the Amazon and Pará estuary are sparse.

I joined the project, “Development of a consistent thermodynamic model of trace element – organic matter interaction in the ocean,” where I have been working to analyse trace metal and organic ligand samples collected previously on the Amazon-GEOTRACES cruise M147. In this project, I have also been working closely with Dr. Martha Gledhill at GEOMAR Helmholz Centre for Ocean Research. My analytical work has focused on (1) quantification and size fractionation of trace metals (Mn, Fe, Co, Ni, Cu, Zn, Cd, Pb) in surface and depth samples throughout the estuary and (2) analysis of Cu-organic matter speciation in these samples.

In addition to my work on samples previously collected on M147, I had the opportunity to go to the Amazon myself on cruise M174 (Apr-May 2021) (blog: https://www.io-warnemuende.de/rv-meteor-m174-2021.html). Here, I worked with another PhD student colleague to collect trace metal samples, as well as conducting an incubation experiment to measure Cu-ligand production by phytoplankton. In addition, I participated on the North Sea cruise M169 (Dec 2020) (blog: https://www.jacobs-university.de/blog-post-m169). This served as the basis for a bachelor student thesis on the analysis of platinum in the North Sea, which I co-supervised. Finally, I had the opportunity to participate in a week-long GEOTRACES summer school in Cadiz Spain (Aug 2019) (https://geotraces.uca.es/), where I learned first-hand about GEOTRACES trace-metal clean protocol with 40 other students from a total of 19 countries aboard the vessel Intermares. In the future, I hope to return to the Amazon Estuary during a period of low-discharge, which has been already approved as a GEOTRACES cruise. Since both previous Amazon cruises (M147 and M174) took place during the high river discharge period, this cruise will help complete the picture of trace metal cycling in this region.

News interview about the cruise: https://www.usf.edu/marine-science/news/2018/usf-students-gain-valuable-experience-on-floating-lab.aspx

2017: OCG in the lab: Ocean Chemistry (not available online anymore)

For coauthored publications prior to my Master’s work, refer to my Google Scholar profile: http://tinyurl.com/Hollister-Scholar